The Viper used fire to finish off Bray Wyatt outside the ThunderDome. The Fiend reappeared and applied his Mandible Claw against Orton.

During the Monday Night RAW broadcasts on the USA Network, superstar Randy Orton attempted to take down Bray Wyatt using gasoline and fire. This week on RAW we saw Bray Wyatt with his teammates touring the WWE ThunderDome facilities. In addition to observing various interactions between the Firefly FunHouse characters and superstars like Riddle and R-Truth, Wyatt faced Randy Orton in the ring. “The Viper” clarified from backstage that he was waiting for his rival for one last confrontation before his match against The Fiend at TLC 2020.

Bray Wyatt walked away from the facility and found a wooden lounge chair that reminded him of his old days as the leader of the “Wyatt Family.” Randy Orton took advantage of the situation and attacked the host of the Firefly FunHouse from behind. After locking Bray in a wooden box, “The Viper” began dousing it with gasoline and threw a lighter at it to set it on fire. The burning box was opened revealing “The Fiend”, who escaped unscathed to connect his Mandible Claw and knock Orton unconscious. 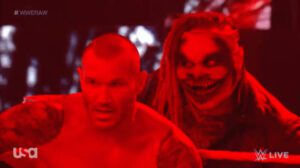 Randy Orton and the Fiend will face off at WWE TLC 2020 After “The Fiend” cost him a new opportunity at the WWE Championship, Randy Orton was invited to a new edition of A Moment of Bliss. “The Viper” clarified that he would not fall for Bray Wyatt’s mind games, and as happened in 2017 he can only defeat him if he finds his weak point. After identifying Alexa as Wyatt’s weakness, “The Fiend” appeared to confront Orton. A few days later, WWE made their match official at TLC 2020 on December 20.