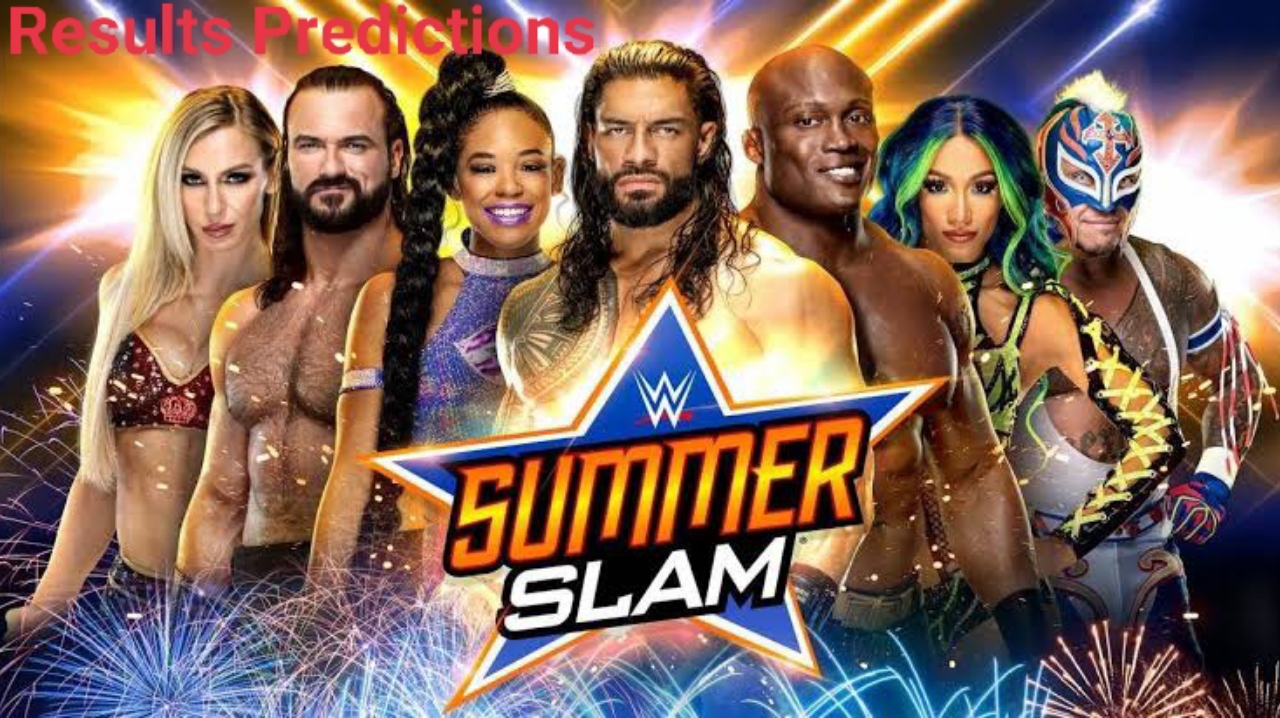 WWE’s biggest Party after WrestleMania 37 SummerSlam 2021 will stream on 21st August at 8p.m ET/5p.m. PT on the WWE Network and Peacock (in USA). WWE has announced several big matches for this PPV, in this article, we will make predictions of the results of WWE SummerSlam 2021.

Drew Mcintyre vs Jinder Mahal: First of all, if we talk about the unique steel cage match between Drew Mcintyre and Jinder Mahal, WWE has booked it very well as well as both the partners of Mahal have been banned from the ring side, so this match is going to be even more spectacular. If we talk about the result, then here are the chances of Jinder winning because if the company has booked Mahal against the former WWE Champion, then Jinder can get a push here . Mahal has just returned in WWE a few months ago So here he has a good winning momentum.

Sheamus vs Damian Priest United State Championship match:  Sheamus has been the champion for a long time and right now WWE  is using Damian Priest well, so here he has a good chance of winning.

The Usos vs The Mysterios for SmackDown tag team titles : Jey and Jimmy have a pretty good record as a tag team in WWE and recently they defeated Mysterios to win the SmackDown Tag Team Titles, so we don’t think they’re going to losse it at this point.

Charlotte Flair vs Rhea Ripley vs Nikki A.S.H. for the Raw Women’s  Championship : There will be a triple threat match, it is difficult to predict this match’s result because sometimes Nikki defeats Rhea, sometimes Charlotte and Rhea def. Nikki, so Nikki can get the benefit of being the champion and she can retain the championship though Becky Lynch’s return can also be seen after the match.

Seth Rollins vs Edge : Talking about the match between Edge and Seth Rollins, there is a rivalry between them for a long time, in Money in the Bank, where Edge was defeated in the Universal Title match due to Seth Rollins’ interference, so here Edge has his revenge.

Alexa Bliss vs Eva Marie: The match between Alexa Bliss and Eva Marie has not been built up well by WWE, here we see Alexa clear winner.

Sasha Banks vs Bianca Belair for SmackDown women’s title: The SmackDown Women’s Title match between Sasha Banks and Bianca to be pretty decent we can expect a get new champion from this match .

Goldberg vs Bobby Lashley for WWE Championship:  Bobby Lashley will face Goldberg for the WWE Championship. WWE Hall of Famer seems less likely to win match but if you look at it from the other angel as he said he has come for his son then we can expect Goldberg will be new champion as he had to beat Brock Lesnar.

John Cena has advertised for SmackDown even after SummerSlam, so it seems that Cena can break Ric Flair’s record and become world champion for the 17th time, if we talk about Roman Reigns, then the company booked him very strong in heel character, and The Tribal Chief has successfully defended his title several times, in such a situation that Roman loses this title, it seems a little less likely .John Cena has good momentum to win the match,but  still we want to go with Roman.