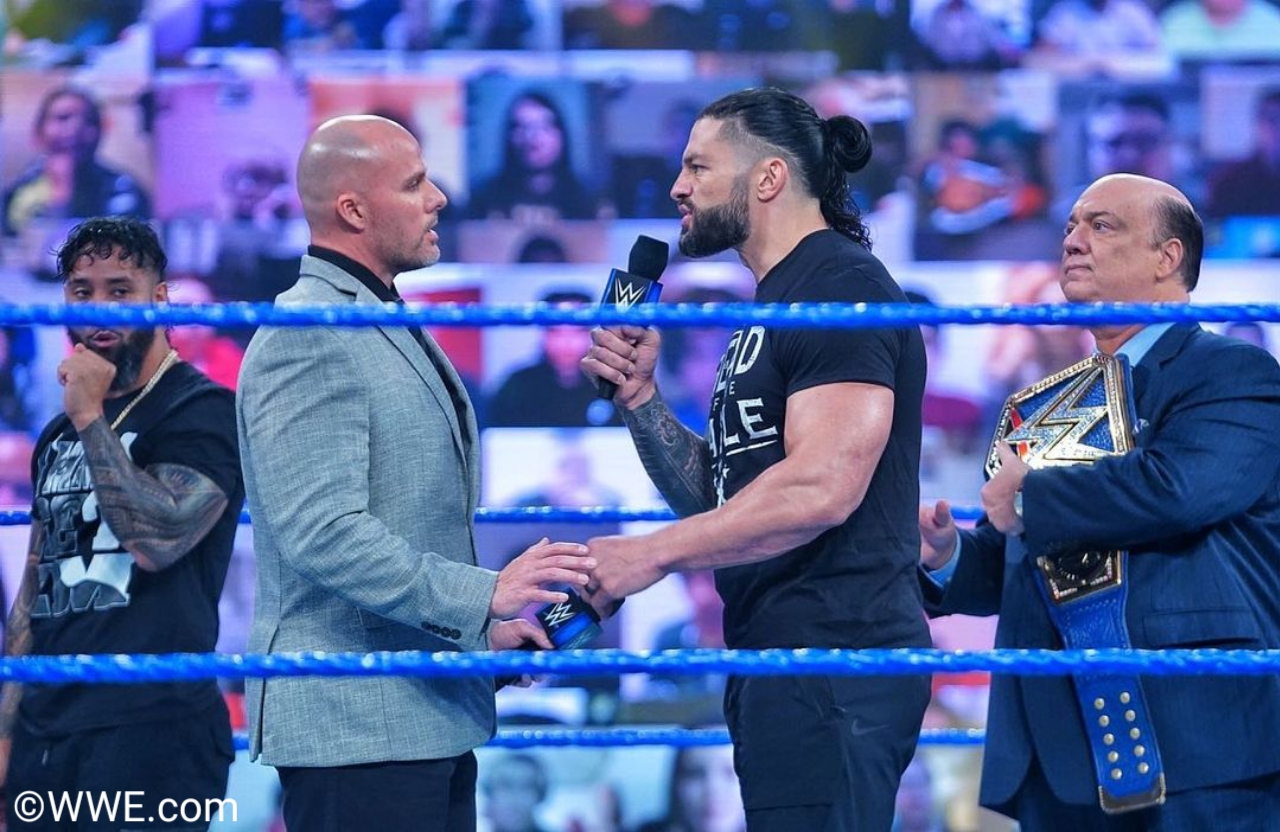 Big E will face Apollo Crews, while there will be a five-way match to define Roman Reigns’ next opponent.

Roman Reigns, accompanied by Paul Heyman and Jey Uso, is the first to enter the ring. He takes the mic and says he respects someone with as many ambitions as Kevin Owens.

He admits it put him on the ropes, and he had to do things he didn’t want to do. He adds that he loves the entire SmackDown roster, and that he cares about all of them.

He says that if people think he’s evil, it’s because of Adam Pearce, whom he invites into the ring. He claims that it is because of him that Owens got the green light to get hurt, and then he does not face the circumstances.

He says that from now on he will not let a useless person decide for him. He warns him that from now on, it will be the Cacique himself who will make the brand’s decisions.

Apollo begins with a dropkick and big boot. The champion responds with an elbow and then gives him a big splash on the edge of the ring. Apollo executes a lunge and body splash, then combined with a German triple suplex. Big E goes ringside and Apollo chases him with a back flip.

Apollo takes it to the third string and applies a superplex. Both are taken by the legs and a quasi-simultaneous count occurs. The combat is therefore resumed. Big E, annoyed, applies belly-to-belly, and when he goes for the Big Ending, Apollo sneaks out.

Regain the initiative with frogsplash and superkick. Armdrag by Big E, which continues with Urinagi and Big Ending.

Sonya Deville is backstage with Adam Pearce. She says she is not proud of what she has done, and she did not return to regret her past. Adam welcomes you. Elsewhere in the venue, Bayley and Bianca Belair announce their entry into this year’s Royal Rumble.

"No no… I am NOT putting myself in a match tonight." – @ScrapDaddyAP 👀#SmackDown @SonyaDevilleWWE pic.twitter.com/JYWi7eTfhS

Carmella and Sasha Banks argue backstage, one boasting about being Sports Illustrated’s fighter of the year, while the other reminds her that he beat her last week.

Ziggler and Dawkins start with a headlock, and Angelo pulls a dropkick to knock Ziggler down. Arm brace and tag Ford, who gives him a shoulder tackle. Roode enters, beating Ford to the ground, trampling him in the corner.

Montez blocks a right hand and responds with kicks to the ribs, however, his knee is sore, and the referee comes over to see. Returning from commercials, Dolph applies a lock to the neck, but Montez manages to get away and goes to the third string.

Roode distracts him and Dolph takes advantage of the distraction to apply a facebuster. He’s going for the Superkick, but Ford anticipates it. Dawkins takes Roode out of the ring, Dolph lunges him, and then applies a backbreaker.

Roode’s Glorious Suplex, Ford comes off in two, and but succumbs to a Zig Zag combined with Spinebuster.

After the combat, Roode and Ziggler continue attacking the Profits.

Adam Pearce is approached by Paul Heyman, who says he does not want further conflict, but harangues Pearce, reminding him of his wrestling career, and says he has added it to tonight’s Russian Roulette style match to define the Universal title contender.

Ruby Riott and Liv Morgan are chatting when they meet Billie Kay, who is ecstatic to now be part of the team. The Riott Squad girls don’t know how to get rid of her, and Billie asks them what the next step is.

Rey Mysterio and Sami Zayn begin the match. Sami complains that he has the entire management against him as one of the first two fighters. Rey dispatches it with 619 and frogsplash. Sami Zayn is eliminated.

Shinsuke Nakamura is the third man to enter. He applies a superkick to Rey, then he takes him out to ringside where he applies a Kinshasa, but Mysterio manages to resist, and when he enters the ring, he comes out in two. Electric Kick from the Japanese, which continues with a knee drop.

When taking it to the third string, but Mysterio manages to dodge it, transposes a powerbomb in hurricanrana, and after a 619, tries the frogsplash. Nakamura raises his legs and subdues him with an armbar. Rey Mysterio is eliminated.

Baron Corbin is the next to enter. Take advantage of Mysterio’s weakness to attack him, but not before crashing Dominik against the steps. Returning from commercials, Corbin applies a lunge, and Nakamura with two taco kicks.

Kinshasa’s first attempt is contained by a Deep Six, but after exchanging lariats, Nakamura manages to knock him down with a key and finish him off with a Kinshasa in the middle of the ring. Baron Corbin is eliminated.

Daniel Bryan is the next to enter.

Apply a stomp to the knee, then move to brace the left shoulder. Nakamura’s Suplex, but Daniel applies an Ankle Lock and then a Northern Lights suplex. Shinsuke gets off the bill in two, but Daniel applies several Yes! Kicks. The Japanese tries to bring the fight to the ground, and locks Bryan in a crowbar.

Bryan manages to win his back to make a brace and then a Yes! Lock. Nakamura reaches out to touch the strings. Daniel supports Shinsuke on the third rope to go for a Frankensteiner.

Nakamura resists and takes out a flying knee. Both exchange kicks to the tibias. Bryan knocks Nakamura down and gains momentum for the Dragon Kick, but Nakamura intercepts him with a Kinshasa. Daniel Bryan is eliminated.

When they knock him unconscious, they put Adam in the ring. Jey gives him a superkick, and they place him on Shinsuke.

The show ends with Roman posing with the medal, glaring at Adam.