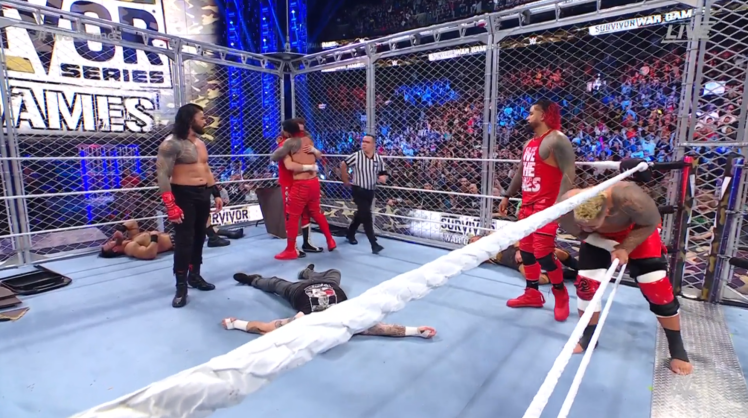 Team @BiancaBelairWWE wins inside #WarGames following a spectacular @BeckyLynchWWE leg drop off the top of the cage for the win!#SurvivorSeries pic.twitter.com/3HiGP3opha

What a dive from @ShotziWWE into the WWE Universe at #SurvivorSeries!!! pic.twitter.com/F7Sw11UsHR

Backstage Sami Zayn went to Roman Reigns’ locker room for a chat.  Reigns asked him if it was true that he talked to Kevin owens on SmackDown.  Zayn admitted that yes, but that he wanted to convince him to betray The Bloodline and he told him no way. The Tribal Chief told him that he must earn his trust tonight, in the ring, with his family.

And he assured him to look into his eyes to see if he wasn’t lying.  Zayn told him that he was on his side, without hesitation.  They both looked into each other’s eyes and Reigns gave him a hug, although not very convinced.

Austin Theory defeated Boby Lashley and Seth Rollins after taking advantage of Lashley’s Spear on Rollins and pinned the champion to WIN the United States Championship.

The Bloodline (Roman Reigns, Jimmy and Jey Uso, Solo Sikoa and Sami Zayn) defeated Drew McIntyre, Kevin Owens and The Brawling Brutes (Sheamus, Butch and Ridge Holland) after connecting a Low Blow and the Helluva Zayn’s kick to Owens and Jey’s Frog Splash on KO.  In the finale, Jey Uso finally accepted Sami Zayn as family for saving him much of the fight.