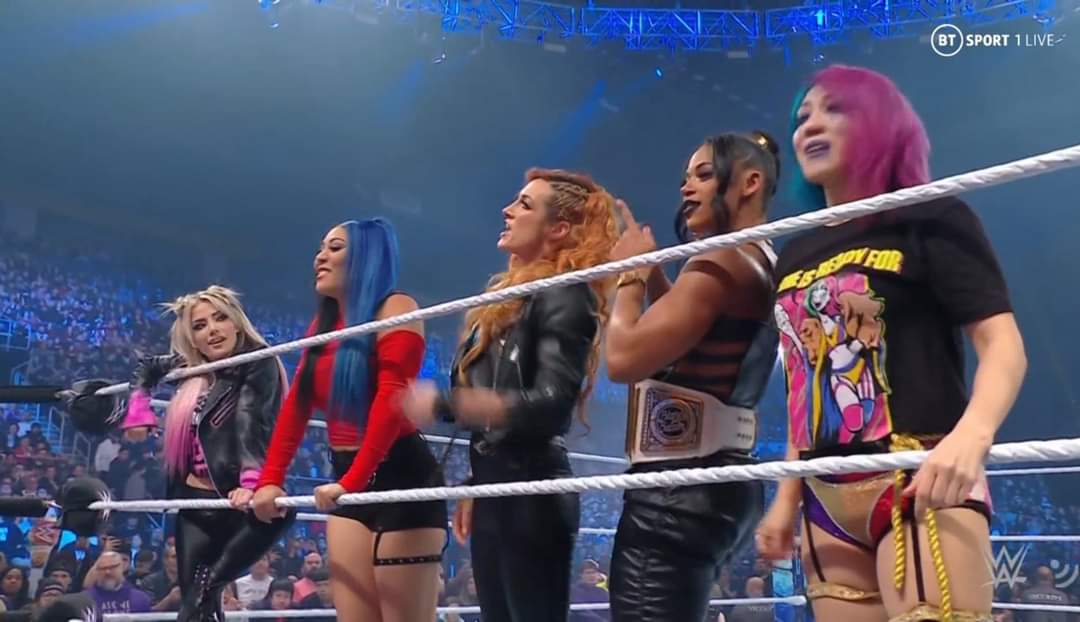 Damage CTRL, Rhea Ripley and Nikki Cross started the show. Bayley talks about the advantage of her team in WarGames, in addition to remembering that her rivals have one less member who will not make much difference.  Bianca Belair’s team shows up to face her opponents, promising that it’s time to reveal her secret weapon.  BECKY LYNCH RETURNS TO WWE!  The competitor runs to the ring and drives the rivals away from her along with her WarGames partners.

Bray Wyatt speaks before the public.  He makes it clear that people think very differently of his person than who he really is.  He acknowledges that fans want to see a monster or a demon, but he no longer wishes to be a human tornado.  He clarifies that he was not the one who attacked the LA Knight.  Uncle Howdy interrupts on the screens, warning that the public is trying to believe a lie on Wyatt’s part.

LA Knight provides a backstage version of him with his arm in a cast and crutches.  The wrestler states that he was crushed by a pile of trash, and if it weren’t for his current condition he would stop Bray Wyatt immediately for his actions.

Ricochet (USA) defeats Braun Strowman (USA) in the semifinal of the SmackDown World Cup. Strowman starts with a solid lead.  He manages to catch his opponent with a jump, but is kicked twice before being sent to ringside.  Ricochet looks for a jump and is caught and thrown towards the commentary table.  It looks like Braun takes the win, but GUNTHER distracts the giant and allows Ricochet the Crucifix Bomb for the pinfall win. Now it’s clear indication that Gunther’s next challanger will be Monster Among Man.

Backstage, Kevin Owens and Sami Zayn have a verbal argument regarding the latter’s position on The Bloodline.  An enraged Jey Uso stops Zayn at the dressing room door before letting him in.

Ronda Rousey and Shayna Baszler attack Raquel Rodriguez backstage.  Both go up to the ring and take the microphone, clarifying that the fight will not take place due to “accidents”.  Shotzi also enters the ring and the bell rings.

Drew McIntyre and Sheamus defeat The Usos (Jimmy Uso and Jey Uso) to get the upper hand in WarGames.  Jimmy and Sheamus struggle in the first moments.  The champions are in danger thanks to the teamwork of Drew and Sheamus.  At ringside, the face to face between all those involved in WarGames begins.

“The Celtic Warrior” escapes from an offensive and relieves his partner.  McIntyre takes care of Jimmy, but Jey’s interference causes him to lose coordination.  Sami Zayn prevents a Claymore and allows The Usos to counter with a Superkick and launch him towards the steel steps.  Drew takes distance and both teams relieve.  Sheamus applies punches to Jey’s chest.

Team Brawling Brutes get the #WarGames advantage!#SurvivorSeries is going to be a good one. #SmackDown pic.twitter.com/iCxW7mhDIQ

Both Usos escape a double attack and Drew surprises Jimmy with a Claymore.  Sheamus takes a jump to Jey’s head before applying a knee.  The referee is distracted several times by the men at ringside.  K.O.  causes Sami to be ejected and applies a Stunner to Jey for the Brogue Kick and the victory of his team.