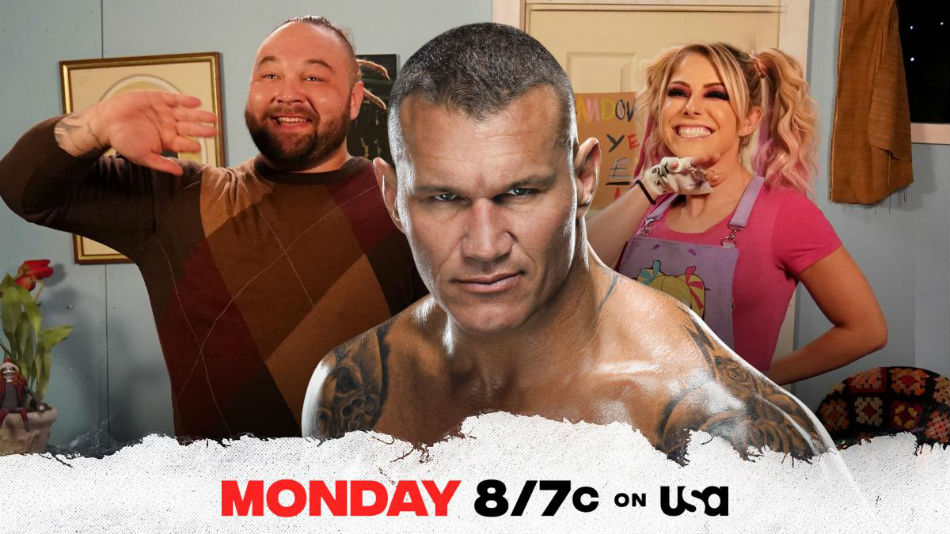 Hello everyone welcomes to wrestling unseen live coverage of today’s Raw Show, Raw begins with a tribute to Pat Patterson, who recently passed away.

RAW kick-off show started by Randy Orton when he goes out in the ring. As he arrives, scenes of his participation in A Moment of Bliss are repeated last week. Randy says there’s no limit to holding him back, and no matter if Bray owns a mask or not, when the time comes he’ll look the demon in the eye and show who he is. He talks about the Firefly Funhouse, and Bray Wyatt responds from there.

“I’m the last person you want to play with, Bray, ” threatens Randy. But Bray takes advantage of that to turn his show into a game show. The puppets, Mercy, Huskys, and Ramblin, respond to how I should punish Randy. Wyatt says none of them responded correctly, and it gets serious. “Unfortunately for you, he always has the answer,” he says. Orton issuing a fight tonight with Bray Wyatt tonight, not The Fiend, whom he’ll see on TLC. Bray accepts excitedly and greets by closing his space.

In the next segment, Asuka leaves with Lana for her next fight. Before going out into the ring, Nia Jax motivates her partner, Shayna Baszler.

Asuka (c/ Wool) vs. Shayna Baszler (c/ Nia Jax)
Asuka tries to surprise with an Ankle Lock right away, Shayna avoids it and looks for one of her own. Asuka does not let go of Shayna’s leg, who with great power lifts it and throws it into Suplex. The action moves to ringside, where Nia attacks Lana and Shayna attacks Asuka. Returning from the pause, Shayna punishes Asuka’s arm, bending it and manipulating her wrist. Asuka escapes and connects a German Suplex. Shayna avoids a couple of Attacks from Asuka, but falls into an Armbar. Shayna turns and passes the Kirifuda Clutch, Asuka escapes and covers her. While searching for the Asuka Lock, Nia pushes Lana against the pole. The cargo but Lana escapes by throwing it against the metal steps. Nia puts her in Powerbomb’s position but Lana surprises Hurricanrana to throw her at the commentary table. Shayna, completely distracted, receives a Roll Up from Asuka and loses.
Winner: Asuka.

Riddle interrupts Dana Brooke and Ricochet as they talked about their match later against RETRIBUTION members. Riddle is looking for MVP and Bobby Lashley, carrying a box of “Bronuts” in their hands. Riddle leaves them talking, but then they’re interviewed. Ricochet and Dana say tonight is about teamwork, and they won’t let RETRIBUTION disrespect them.

Ricochet & Dana Brooke vs. RETRIBUTION (Reckoning & Slapjack v Mustafa Ali)
Dana starts with a slap on Reckoning and immediately goes to the punches. Relays for both sides, Ricochet’s Hurricanrana and jumped over the third rope out over Slapjack. Falcon Arrow for Ricochet upon returning to the ring, but then Slapjack fails a Cannonball. Women enter, Reckoning is distracted by Ali’s orders and receives a Sit-Out Slam for the count of three.
Winners: Ricochet & Dana Brooke.

Keith Lee meets Sheamus backstage. Lee tells him it’s only a matter of time before Sheamus points the dagger in McIntyre’s back. Sheamus stands up and faces Lee.

Miz and  Morrison kick off Miz TV. The guest is AJ Styles, who is asked about his match against Drew McIntyre on TLC. While he never confronted him, he says his plan is simple: to attack Drew with a chair until he broke his back. Styles says Drew is big, strong, but that doesn’t mean anything when I knocked him out and took the title. “That’s if Drew comes to TLC as champion,” Morrison says. Miz and John begin to imitate the accents of Sheamus and McIntyre.

Sheamus interrupts them. “Despite being entertained, I’m sick of people talking about how I’m going to betray my friend,” Sheamus says. The Celtic Warrior threatens them, but Miz and John taunt him by saying they outper get over it in quantity.

Drew McIntyre comes out and enters the ring with Sheamus. “I’ve had everything against it on other occasions, but I’m still a champion,” Drew throws. McIntyre taunts Miz and Morrison, causing tensions to untag. AJ says it won’t be three against two, but four against two. Drew and Sheamus attack Miz and John in the ring, causing them to flee.

Kofi Kingston (c/ Xavier Woods) vs. Shelton Benjamin (c/ MVP & Cedric Alexander)
Shelton takes the lead in the first few minutes. He constantly attacks Kofi, connects a Body Slam, and corners him. Kofi replenishes, searches for the SOS but receives a tough Gutwrench Powerbomb. Monkey Flip but Kofi falls to his feet. He jumps from his back to him, Benjamin catches him and throws him into ringside. He runs for him but Kofi dodges it and crashes into the pole. Shelton returns to the ring in time but receives a Trouble in Paradise for the count of three.
Winner: Kofi Kingston.

At the end of the match, Cedric Alexander takes the floor. He says he’s sick of The New Day almost getting away from them and challenges Kofi right now. Kingston heads into the ring despite being sick with one leg.

Jeff Hardy vs. Bobby Lashley
Lashley takes control at first. He tramples Jeff around the corner, MVP comes up to mess with Jeff. Hardy manages to escape and connect a Leg Drop. He’s looking for his punchline, but Bobby catches him. Jeff looks for height but is distracted by MVP who gets in the ring. Riddle appears and goes down to MVP, while Jeff pulls Lashley out of the ring. Flying Clothesline over Bobby before the break. When he gets back, Bobby’s the one in control. Get Jeff out of the ring and face Riddle. He puts Jeff in Tree of Woe and kicks him several times. Suplex and count two. Sleeperhold to Jeff, Riddle gives Jeff directions and encouragement from ringside. Hardy finally manages to break free and moves on to attack. Inverted Atomic Drop and Leg Drop classics by Jeff. Whisper in the Wind and counts two. Bobby’s Flatliner and counts about three, Jeff resists. Twist of Fate! Jeff looks for height, but Bobby gets up in time. Spear! Hurt Lock and Jeff give up.
Winner: Bobby Lashley. 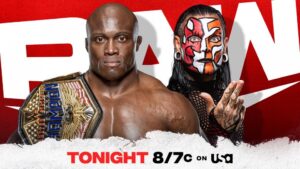