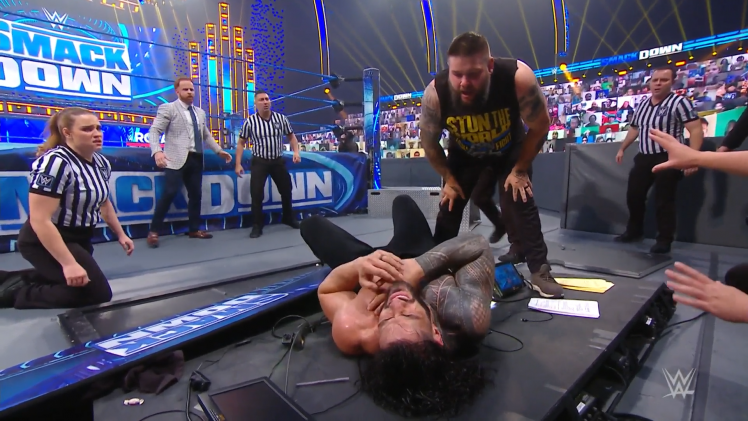 Kevin Owens attacks Roman Reigns on Friday Night SmackDown Owens rescued Adam Pearce from an attack by The Big Dog in the last moments of the blue show WWE agreed to a match between Pearce and Paul Heyman at the beginning of the blue show.

During the Friday Night SmackDown broadcasts via FOX, superstar Kevin Owens carried out an ambush against Roman Reigns, his Royal Rumble 2021 rival.

After another attempt to stop the “Head of the Table”, Adam Pearce ended up agreeing to a match against Paul Heyman for the main event of the day. In an attempt to get revenge for what happened last week, Heyman faked an injury and was ultimately replaced by Roman Reigns.

The confrontation never started, since “The Big Dog” chose to take his rival to the surroundings of the ThunderDome. The attack was quickly stopped by Kevin Owens, who for the first time managed to show himself with his head held high on Reigns.

After landing several blows to the head and body, “KO” threw his opponent onto the commentary table with a Powerbomb, thus leaving him a strong warning a few days into their fight.

Kevin Owens to face Roman Reigns at Royal Rumble 2021 Originally, Adam Pearce was confirmed as the next opponent for “The Tribal Chief” after winning a Gauntlet Match for a shot at the universal title. After signing the contract in the last minutes of the blue show, the general manager declared that he was not in the medical conditions required to compete in the event.

Taking advantage of his authority in the company, Adam confirmed Kevin Owens as his replacement on January 31 at a Last Man Standing.