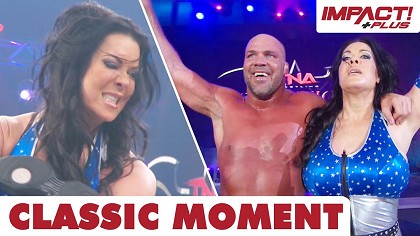 Eric Bischoff: “Chyna’s arrival at TNA was a bad idea” WWE Hall of Famer reveals Hulk Hogan was never planned to fight Mick Foley on TNA Eric Bischoff believed that Chyna’s personal problems could have caused a big problem for the company’s image.

In the latest edition of the “83 Weeks” podcast, WWE Hall of Famer Eric Bischoff analyzed TNA Sacrifice 2011 and the events leading up to the PPV. In the talk, he also discussed other topics of interest, such as the dismissal of Jay Lethal, the physical condition of Hulk Hogan or the arrival of Chyna at TNA.

I don’t know anyone who doesn’t have a good opinion of him, first as a person and also as a professional, because he was excellent on both counts. I was really stunned when they released him and I don’t know why. I did not participate in the decision. ”

Bischoff also cleared the rumors that Mick Foley was in a match against Hulk Hogan: “No. This was the beginning of a really dark period, physically speaking. The Hulk had been involved in a lot of negative situations. A lot happened in his life with the divorce and other problems that had nothing to do with wrestling. He was involved. pain.

That’s when the back started, before 17 surgeries. I think I already had a couple back then, in 2011, but when I had to appear on set a lot of times I flew to Tampa the night before, I I would meet at a hotel and he would pick me up. We would go to his house and then we would drive to Orlando together for the show. It took Hulk 10 minutes to get out of the car, so no fighting was thought at the time. ”

One of the big WWE stars who ended up going through TNA was Chyna. Bischoff tells his version of the story and assured that it was not a good idea: “Chyna is not here to defend herself, and there is no reason to speak ill of her, but I think the idea of ​​bringing her in was Vince Russo’s. Perhaps Kurt Angle also had something to do, as did Jeff Jarrett. I don’t know, I didn’t.

I’ll tell you how I felt at the time, looking at the situation from the outside: I thought it was a bad idea. Chyna had gone through a lot of personal problems and they were very media. For me it was a risk to bring her, given all the controversies that everyone was aware of in TMZ and in the media, there was risk to the business because of the advertising issue. She wasn’t ready to fight a match, she wasn’t going through her best moments. I just felt that the risk completely outweighed the reward, the potential reward. “