AJ looks to hurt Drew’s leg in the opening minutes, but the champion responds with power to take control. AJ goes up to the corner, Drew pulls him off a chop out. McIntyre throws AJ through ringside, against the barricade and against tables with chairs, always on the lookout for the giant Omos. 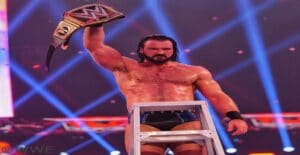 Drew begins to climb the ladder, but AJ hits him with a chair on the leg. Drew throws AJ face-on against a chair Styles himself had placed in the corner. AJ throws a ladder over Drew, looking to continue the attack but McIntyre responds with Future Shock DDT. Drew throws the ladder at AJ, Styles hits his leg again. Calf Crusher with Drew’s leg caught on the ladder.

Styles then looks for the Calf Crusher with a chair on his leg, Drew frees himself by crashing the back of AJ’s neck against the ladder. AJ tries to jump to ringside, but Drew throws a chair at his head. Back in the ring, Drew applies a Belly to Belly Suplex on a ladder in the corner, thus slowing AJ’s attack. AJ’s Phenomenal Forearm, they both lie down. Omos passes him a ladder and AJ starts up. Drew catches him at Military Press and throws to a table at ringside. McIntyre climbs the ladder, but The Miz appears! Miz slaps his legs and applies a Powerbomb on a table.

The Miz is cashing in the Money in the Bank briefcase! Now combat is a triple threat. The Miz climbs the ladder but Omos carries him like a child and throws him towards a table outside. Morrison snaps a chair on Omos’s back, who doesn’t even seem to be in pain.