Brodie Lee passes away at the age of 41 Brodie Lee’s wife confirmed he was battling lung disease.

Jon Huber, known to AEW as Brodie Lee and to WWE as Luke Harper, has passed away at the age of 41. The news was confirmed by his wife Amanda and the official All Elite Wrestling social networks: “The All Elite Wrestling family is heartbroken.In an industry full of good people, Jon Huber was exceptionally respected and loved in every way. A fierce and captivating talent, a thoughtful mentor, and just a very kind soul who flatly contradicted his character Mr. Brodie Lee “.

“Jon’s love for his wife Amanda and his children Brodie and Nolan was evident to all of us who were fortunate enough to spend time with him and send our love and support to his family today and forever.

The popularity and influence in the world of wrestling was global and transcended AEW. We had the privilege of calling him brother, friend and one of our own. ”

His wife Amanda issued a statement clarifying that he died after a tough battle due to a lung problem that is not related to COVID-19.

Brodie Lee made his professional debut in 2003 and spent many years on the freelance scene working for companies like CHIKARA, ROH, Dragon Gate USA, among others. In 2012 he signed a contract with WWE where he was renamed Luke Harper.

During his time in NXT, he joined The Wyatt Family alongside Erick Rowan and Bray Wyatt, managing to win the Tag Team Championships for the black and gold brand and rising to the main roster together, incorporating Braum Strowman into the family. 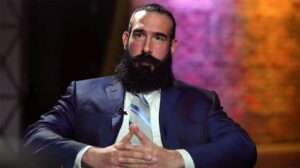 After winning the SmackDown Tag Team Championships twice and the Intercontinental Championship, Lee was released from his contract in December 2019 and returned to the independent scene. In March 2020, he was featured on AEW Dynamite as ‘The Exalted One’ Brodie Lee, the front man of Dark Order. He was the second AEW member to become a TNT champion, having a 55-day reign. His last fight was when he lost that championship to Cody Rhodes on October 7.