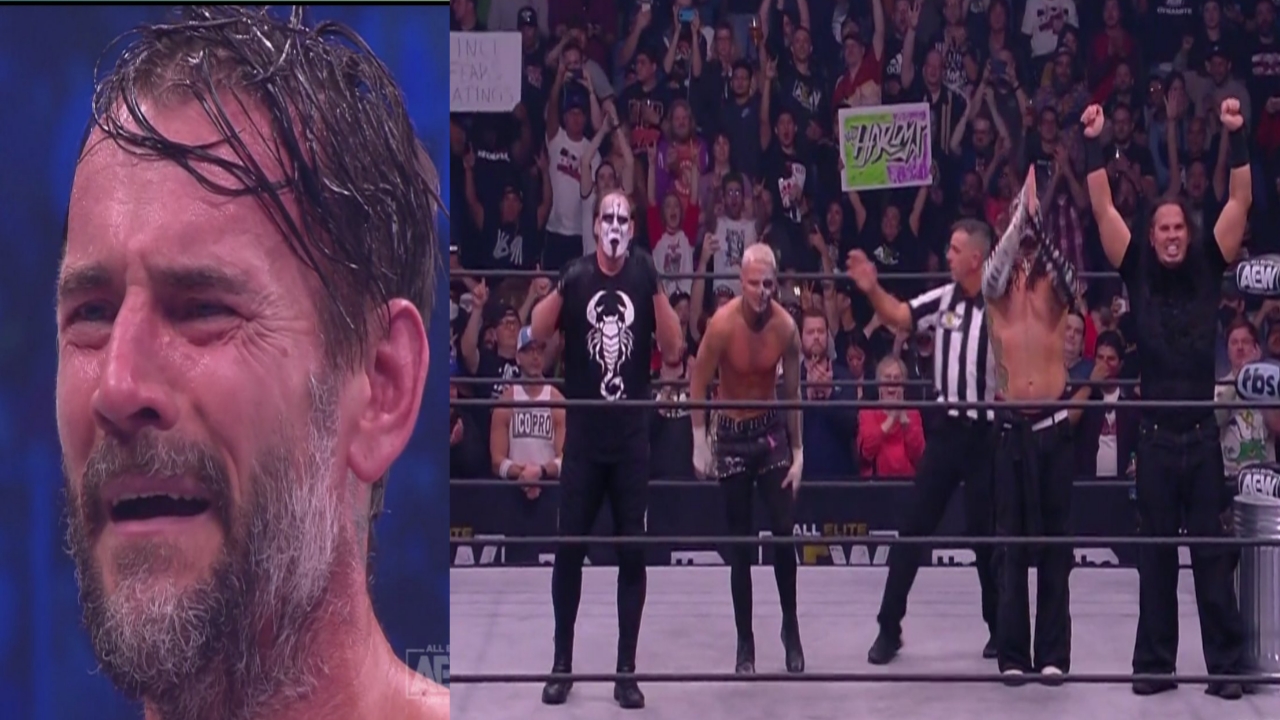 Additionally, The Hardys, Sting and Darby Allin will face A.F.O. in a combat Texas Tornado.

Punk opened the AEW Dynamite show with a strong performance against the FTR member, who tried to make him submit with the Sharpshooter. Finally Punk took the victory with the Anaconde Vice.

And @CMPunk submits @DaxFTR! A huge victory to kick off #AEWDynamite LIVE on TBS! pic.twitter.com/3QkyRTH813

Chris Jericho Segment – Jericho talks about John Silver, who has a photo with Jericho when he was young. Daniel García says that the JAS destroys professional wrestlers, who have nothing to do with “sport entertainers” like them. The rest of the Jericho Appreciation Society mocks Santana and Ortiz, saying that they are nowhere to be seen today.

In a Tornado Tag match. Chaotic fight that took the members throughout the arena. Jeff Hardy hit a Swanton Bomb from a wall on Butcher and Blade on tables. Matt Hardy and Sting finished off Private Party to win the match.

The crowd is ELECTRIC as #TheHardys make their way to the ring to join @Sting and @DarbyAllin here on #AEWDynamite LIVE on TBS! pic.twitter.com/IS9TwnC15i

FTR are interviewed by Tony Schiavone. Both are annoyed by the presence of Gunn Club, Dax throws a challenge and says that he will not call them “ass boys”, but “the sons of Billy”. –

The Blonds tried to put up a fight, but they couldn’t in the face of Mox and Danielson’s violence.
After the fight, Moxley revealed the name of his team with Danielson and Wiliam Regal: Blackpool Combat Club. “If you want to earn the club’s medal of honor, there is only one way to do it: the hard way,” Moxley said.

.@JonMoxley with a huge chop to the chest of @GriffGarrison1! #AEWDynamite is LIVE on TBS right now! pic.twitter.com/NTUYHthZXn

"If you want a badge of honor from the Black Pool Combat Club, there's only one way to get it – the hard way." @JonMoxley and @BryanDanielson with @RealKingRegal putting the entire #AEW locker room on notice! #AEWDynamite is LIVE on TBS right now! pic.twitter.com/FjrK4xXa6E

MJF arrives in the ring with Shawn Spears, in addition, he has security staff at ringside. MJF sends a message to Wardlow, saying that unlike him, he is a man of his word. MJF accuses CM Punk of cheating to win at Revolution.

“I don’t know when, I don’t know where, there will be another fight, and whenever it is, I will give you the most humiliating defeat of your career. And even this will not end. It will end when I go to your funeral and urinate on your grave,” MJF shoots .

MJF talks about Wardlow again. “I created you. And how did you repay me? By making me lose the biggest match of my career, and then walking into my ring to ask me to release you from your contract. Listen, piggy, you made a deal with the devil. Did you think that “Were you having a hard time? I’m about to make your life hell. If I tell you to jump, you’ll ask how high,” says Max. “If I tell you to kick your mother out of the house, you do it. I own you, pig,” MJF yells looking at the camera.

Wardlow charges into the ring! He attacks the security personnel, but several more appear to stop him. “You don’t understand. You work for MJF, not for AEW. And I don’t want you here. But don’t worry, you greedy little pig. I’ll keep paying you, but for you to be at home, month after month, year after year, until that they forget that you exist and go back to being what it was when I met you: NOTHING”, sentences MJF.

Tony Schiavone interviews Best Friends. Trent Beretta won’t let Wheeler Yuta talk. He says that he never liked him, and reproaches him for turning his back on the guys who let him sleep in their house, who helped him so much in the business, all for trying to be part of Regal’s club.

.@TheLethalJay makes his way to the ring! #AEWDynamite is LIVE on @TBSNetwork right now! pic.twitter.com/mfGyWYYOFt

Yuta says that he has no love for Trent either, and that he is not here to be the best friend, but the best fighter.

– Adam Cole defeated Jay Lethal. Close combat in which Cole used the distractions of his reDRagon teammates to overcome Lethal. Adam applied a low blow without being seen by the referee and then finished off with the Boom.

“There is no one who deserves the championship more than me,” said Adam Cole at the end of the fight. “I’m a champion, I’m a winner. And speaking of which, the world champion doesn’t have the guts to come face to face with us,”

Adam said, when interrupted.AEW World Champion Hangman Page heads to the ring. Page stands before Cole and reDRagon, and without saying a word, starts attacking them with his leather belt. Cole, O’Reilly, and Fish quickly outmaneuver him. Jungle Boy and Luchasaurus go out to save Page! Adam Cole walks away with the Hangman championship.

#reDRagon and @adamcolepro descending on #AEW World Champion #Hangman @theadampage like jackals! Tune in to #AEWDynamite LIVE on @TBSNetwork! pic.twitter.com/yvkeKM8qVS

Sammy Guevara and Tay Conti are interviewed in the ring. Sammy says that he lost the TNT Championship, but he still has the ring, and as long as he is there he will put on the best show possible. Tay takes the floor and says that they want a rematch.

.@SammyGuevara promises to give it his all every time he steps in the ring. Watch #AEWDynamite LIVE on TBS right now! pic.twitter.com/sQmCEQVCES

“Bitch, I’ll kick your ass like they’ve done your whole career,” Tay throws at Paige VanZant. Sammy challenges Paige and whoever wants, against the two of them. Dan Lambert comes out with Scorpio Sky and Ethan Page.

Lambert highlights the members of American Top Team, especially Sky, who has not lost a fight since Tony Khan signed him. Dan laughs at Sammy and Tay, rejecting the challenge.

Leyla Hirsch defeated Red Velvet. Both came out aggressively into combat, but Leyla ended up taking the victory by hitting Velvet with a piece of metal. After the match, Leyla Hirsch attacks Red Velvet with an Armbar. Kris Statlander goes out to stop Leyla! Kris, who couldn’t be at ringside during the match, can now appear to attack Hirsch and defend Velvet.

A controversial win for @LegitLeyla over @Thee_Red_Velvet! #AEWDynamite is LIVE on TBS right now! pic.twitter.com/j3hmXsihtG

Thunder Rosa, the brand new AEW Women’s Champion, comes out to speak with Tony Schiavone. Before she says anything, she is interrupted by Vickie Guerrero’s screams. Rosa tries to answer her, but Nyla Rose attacks her from behind. “This is a true champion,” Vickie yells.

.@ThunderRosa22's hometown welcome is interrupted by the screeches of @VickieGuerrero! #AEWDynamite is LIVE on TBS right now! pic.twitter.com/yIMY9FOiXc

Chris Jericho & Daniel García defeated The Dark Order (John Silver & Alex Reynolds). The Jericho Appreciation Society helped several times from ringside, distracting and even attacking the Dark Order. At the end, Jericho hit Alex with his bat for Daniel to finish him off with the Scorpion Deathlock. AEW Dynamite closes with the Jericho Appreciation Society celebrating their victory in the ring.

And just like that, the #JerichoAppreciationSociety pick up their first win at #AEWDynamite tonight! What a night of action it's been here on @TBSNetwork! pic.twitter.com/oPCEdhuAC3