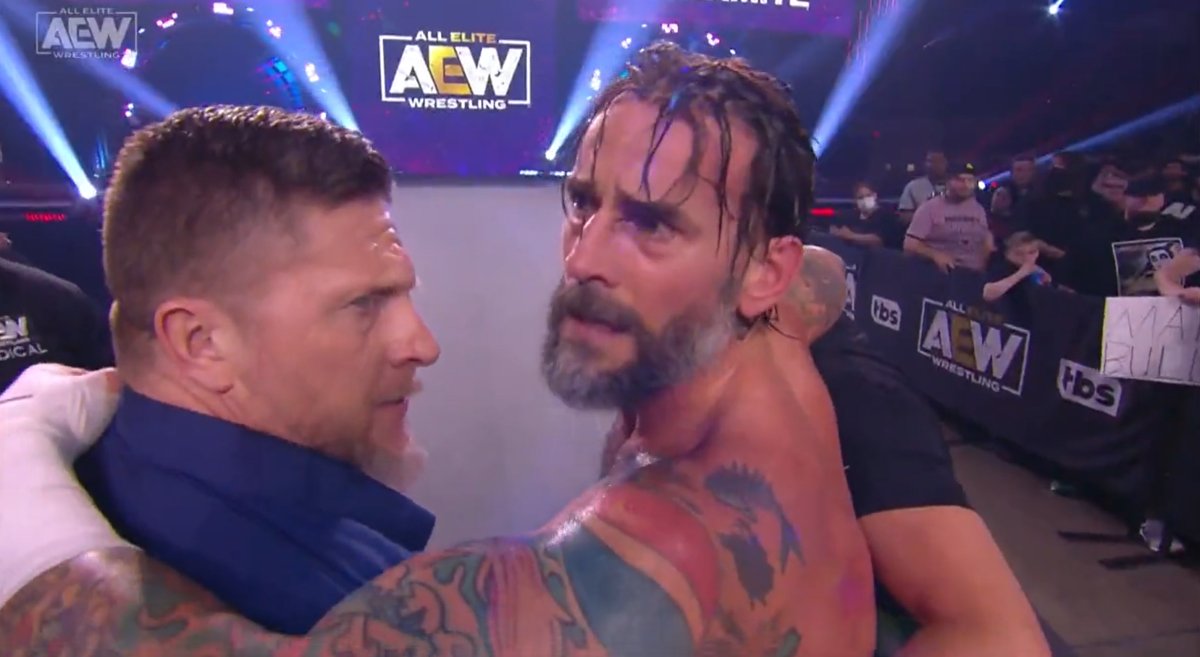 Jon Moxley and CM Punk meet in a match for the unification of the AEW World Championship. TBS broadcasted the 151st episode of AEW Dynamite today, August 24, live from the Wolstein Center in Cleveland, Ohio.

Chris Jericho comes out to welcome Dynamite. He calls out Daniel Garcia for last week’s incident. Daniel Garcia arrives in the ring.  Jericho says that he can understand what happened last week. “I can put this behind me, if you’ll excuse me,” says Chris.

“I’ve dreamed of having a match like this, and I can only hope that some kid wants to have matches like this, that they feel like I felt,” Garcia says.  “You ruined that moment for me, Chris,”.

Bryan Danielson joins the discussion.  “Daniel, I see that your mentor tries to force you to say that you are a sports entertainer. Jericho gets upset and insists once more.  “I want you to say it! Look at me! Say it!” he yells.  Garcia asks him to stop.  “I have my mentor, I have my hero, you want me to make a decision here in front of all these people. Leave me alone!”

Bryan Danielson challanges, Jericho accepts the challenge, for All Out.

Jay Lethal steals the win in the last second of that exchange! Tune in to #AEWDynamite LIVE on TBS! pic.twitter.com/Mf0aQmWMzS

Sonjay Dutt taunts FTR, saying that they think they know everything, but they don’t.  “In All Out, they will be facing Jay Lethal and two great friends,” announces Dutt.
Motor City Machine Guns will fight alongside Jay Lethal!  The team of Alex Shelley and Chris Sabin, will be Jay Lethal’s partners to face Wardlow and FTR in All Out.

Tony Schiavone interviews Thunder Rosa.  The women’s champion announces that due to injury she will not be able to compete for the championship in All Out.  Through tears, she announces that an interim champion will be crowned at the event and wishes her friend Toni Storm luck.

Tune in NOW to #AEWDynamite LIVE on TBS pic.twitter.com/fxX6z7yW0b

Hikaru Shida vs.  Tony Storm vs.  Britt Baker vs.  Jamie Hayter announced for the interim AEW champion on September 4 at All Out.

Jon Moxley defeats CM Punk and becomes the Undisputed Champion of AEW.  unk lands a kick and appears to injure his previously injured foot.  Jon responds with a Lariat and a shower of elbows.  Mox bends Punk’s foot and applies a Death Rider.  Another Deathrider & that’s it.

Tune in NOW to #AEWDynamite LIVE on TBS pic.twitter.com/2UA73kAMux

Jon Moxley speaks backstage. ” I’m professional wrestling. I’m the guy in this industry. There are no limits to what I do and I don’t follow rules. My time is right now. My time is now!” Mox closes.

The Dynamite Finalists in the #AEW World Trios Championship Tournament face off right now! Next week on #AEWDynamite we will see Will Opsreay and #AussieOpen vs. Kenny Omega and the Young Bucks LIVE on TBS! pic.twitter.com/V1Qm7hsPBd

Will Ospreay & Aussie Open defeat Death Triangle to advance in the AEW Trios Championship Tournament.Kenny Omega and The Young Bucks, rivals of The United Empire in the next round, go out on the ramp.  Ospreay and Aussie Open challenge them to go to the ring, but the Bucks and Don Callis prevent Omega from reaching them.

Confirmed matches for AEW All Out 2022 so far

Swerve in Our Glory vs.  The Acclaimed