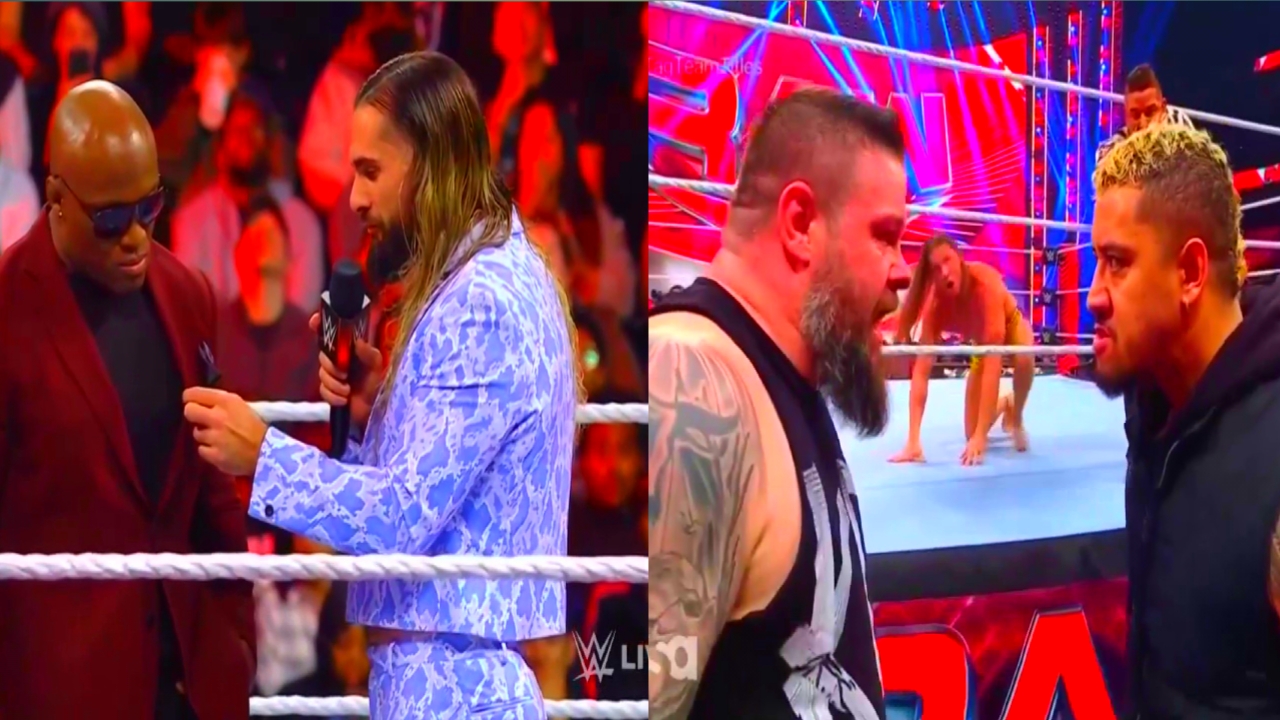 Watch: WWE Monday Night Raw video Highlights December 5, 2022. No. one contender match for Raw women’s championship, The Usos vs Kevin Owens & Riddle and all other matches & segments 16 video highlights below.

The Bloodline kicked off the show. we see a pre recorded video in the parking lot of the venue, where newcomers Solo Sikoa, Sami Zayn and The Usos are almost run over by Matt Riddle, who was coming at full speed on his scooter.  Sikoa decides to take action on the matter and catches Elias.  Together with the rest of his family, they finish off the guitarist before leaving the place.

The Usos announce that their match has been canceled after the unfortunate incident with Elias. Matt Riddle interrupts them, starting an argument with Sami Zayn.  The Canadian suggests that he leave.  But Riddle informs him that he has found a replacement, so the match is still on.  Matt Riddle introduces his partner, none other than Kevin Owens.

Kevin takes control of the fight, taking Jey to ringside and hitting him against the barrier. The Usos end up at ringside, a moment that Riddle takes advantage of to jump on them.  However, Sami moves Jey out of the path of the face.  Back in the ring, Matt doesn’t realize that Jimmy is the legal fighter, which causes him to end up getting a superkick, leaving him completely defenseless against a 1D ultimate.

After the match Solo Sikoa destroys Riddle on the ring, executing several characteristic attacks of Umaga, such as the Samoan Spike and the running Umaga, using a metal chair to do so. You can watch this epic video clip below.

Backstage JBL welcomes a host of superstars to its poker tournament.  We see members of The O.C., Akira Tozawa, Alpha Academy, Baron Corbin, and Dominik Mysterio.  The WWE Hall of Famer reminds you that this is a private game, which can only be accessed by invitation and whose entry is $20,000.  At that moment Dexter Lumis appears, who puts a bag of money on the table, more than enough to cover the entrance to the game.

The Australian dominates the fight without problems, which leads Asuka and Bayley to ally against the Powerhouse.  However, after getting rid of her, both focus on each other again.  The fight turns chaotic. Rhea lunges at Bayley at ringside, but she dodges, causing the powerhouse to hit her back on the ground.  Bayley and Asuka exchange attacks inside the ring, but finally it is the heel who manages to win after applying the final Belly to Belly Suplex.

Seth Rollins enters the ring while the audience sings his song.  “The Visionary” informs them that next week he will face Bobby Lashley.  Bobby interrupts him, assuring that Lesnar has nothing to do with the issue.  This is about the United States Championship, a title he should keep around his waist. Lashley decides he’s had enough and punches Rollins, starting an altercation that several officials and referees try to avoid.  However, it all ends when Lashley accidentally spears one of the officers.

Backstage, Austin Theory is embarrassed by Seth and Lashley, stating that they only fight over scraps.  Meanwhile, he continues to prove that he is the future.  Mustafa Ali interrupts him.  “Unlike you, I have had to fight to get every opportunity,” he reproaches him.