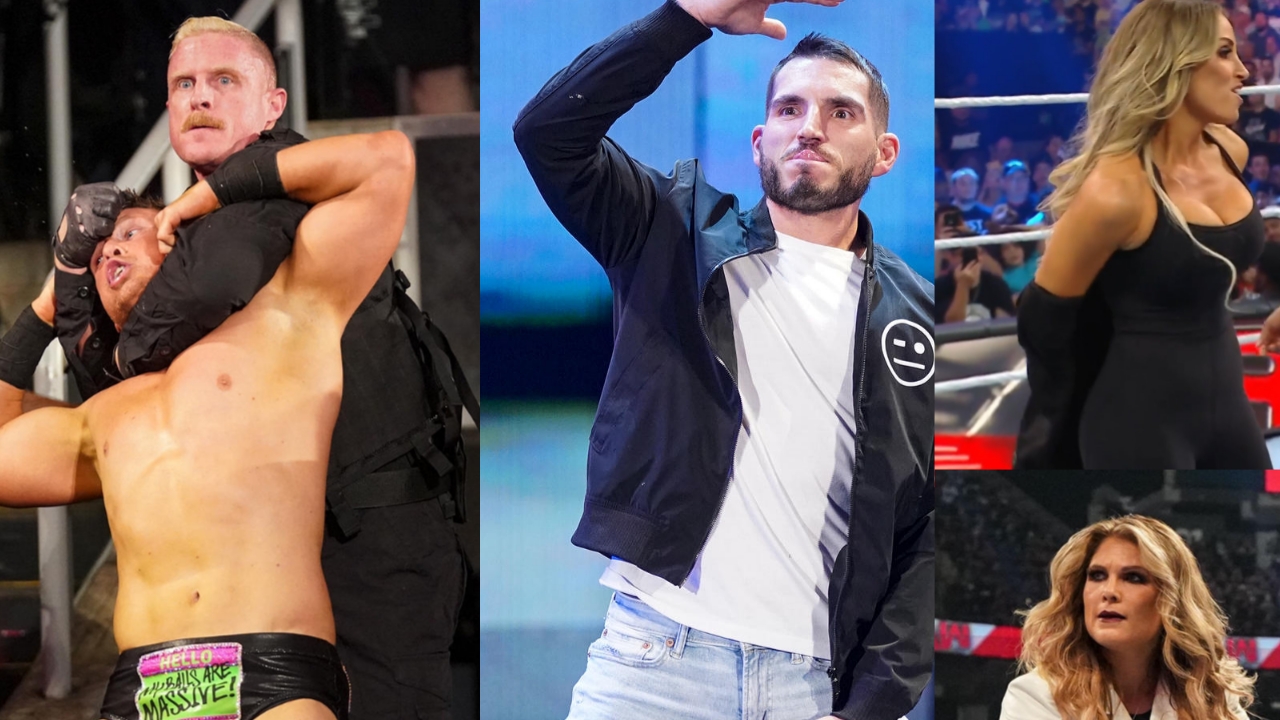 Raw started Riddle and Seth Rollins hit each other backstage and in the stands.

Trish Stratus made her return to WWE in Toronto, with a standing ovation from her people and claimed to be very happy for her return, but was interrupted by Bayley, Dakota Kai and IYO SKY.

Bianca Belair came out to defend her for Bayley’s disrespect, telling her that she wasn’t even up to Trish’s heels. Bayley laughed at Trish for wanting to confront her as one less, but Asuka and Alexa Bliss joined in to stop a possible attack from the villains. Stratus warned them that they will need luck tonight.

IYO SKY and Dakota Kai defeated Asuka and Alexa Bliss by three count after applying a Roll Up to a distracted Asuka by SKY. SKY and Kai advanced to the finals of the WWE Women’s Tag Team Championship Tournament.

Finn Bálor (with Rhea Ripley) defeated Dolph Ziggler by count of three after an elbow from Ripley and the Coup de Grace.

Chad Gable and Otis entered the ring from the wings.  He then called the best in the city to participate in an open challenge. Kevin Owens responded to the challenge, to a standing ovation from the audience and his former character.

Kevin Owens defeated Chad Gable (with Otis) by count of three after connecting the Pop Up Powerbomb. After the fight, Otis wanted to attack KO, but KO applied a Stunner and crashed Gable with a Powerbomb on his body.

The Miz and Ciampa vs. Bobby Lashley and AJ Styles ended in a no contest after an intervention and subsequent attack by Dexter Lumis on Miz, whom he grabbed by the neck and dragged through the public area. Also, a mysterious character wanted to attack Styles at ringside from the public.

Gargano advanced towards the ring under the chant of the public “Johnny Wrestling”. He assured that with nine months out of the strings he will have to learn to do that again. He explained that he thought many times about whether he would continue wrestling, or when he would return to WWE, that he had had dreams of being Intercontinental, United States or WWE Champion.

And that when he saw his son, those hopes were renewed and he decided to return. Theory came out on stage to interrupt Gargano. He asked if he still remembers everything with the time that passed. Johnny snapped that he has seen him and that he has changed a lot in this time, since they were colleagues in NXT.

Theory assured him that they could get back together, that he could take his briefcase to him when he wanted to exchange it and become the ultimate champion. Theory wanted to do the High Five again but Garganó changed his mind and gave him a Superkick.

Edge defeated Damian Priest by a count of three after connecting a Canadian Destroyer and the Spear. After the fight, Edge wanted to hit Priest with some chairs, but Rhea Ripley hit him with a Low Blow and Finn Bálor hit him with the Coup de Garce.

When he was about to be attacked with a chair, Beth Phoenix took the object from Bálor and took the villains out of the ring.