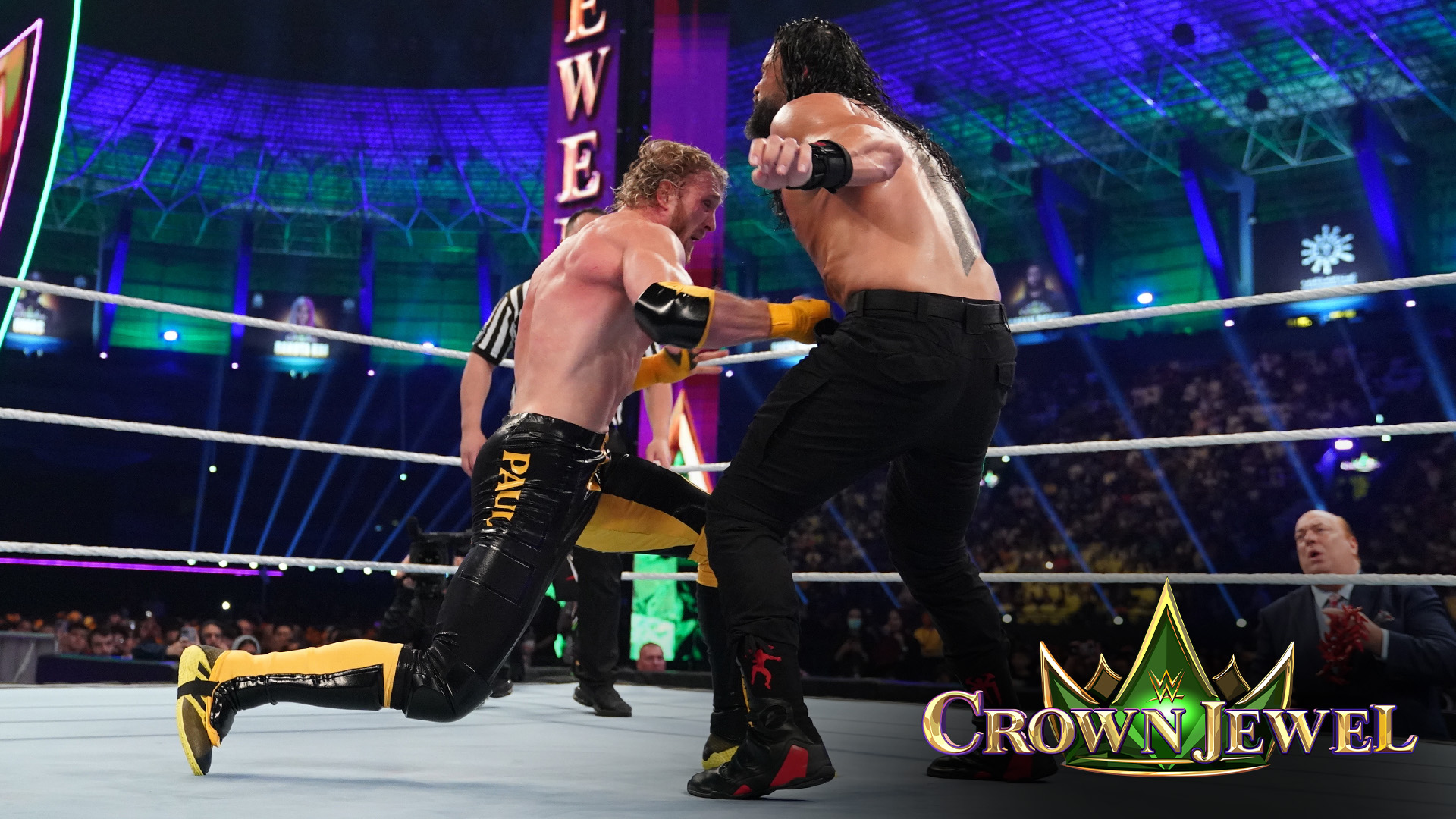 Watch WWE Crown Jewel 2022 Full Highlights below November 5, 2022. Roman Reigns vs Logan Paul, Brock Lesnar vs Bobby Lashley, Drew Mcintyre vs Karrion Kross & all other matches Highlights in one video which is given below.

During main event of the show Logan Paul shoot a video of himself jumping on Roman Reigns from top of the ring pole. You can watch that video below which is going viral on social media.

THROUGH THE TABLE @WWE pic.twitter.com/hmVslclxgs

WWE Crown Jewel 2022 was held in Saudi Arabia on November 5, 2022 all big superstars from Raw & SmackDown Brands participated in this premium live event. Roman Reigns retained his undisputed WWE Universal championship against Logan paul in to the main event of the show.

During the broadcasts of Crown Jewel 2022 through WWE Network and Peacock, superstar Roman Reigns managed to retain the unified Universal Championship after defeating Logan Paul hand in hand.

This was the main matchup of the Premium Live Event in Riyadh, Saudi Arabia. The influencer managed to knock down the “Tribal Chief” in the first moments, breaking his initial relaxation. The champion’s offense was answered by a surprising Buckshot Lariat that left him on the canvas.

However, Roman managed to get up for a first Superman Punch with his opponent in the air. After several minutes, Paul managed to wriggle out of a neck lock and kept up the offense until he landed his own version of the Superman Punch.

Reigns countered with the Uranage and Logan escaped a Superman Punch for two shots to the chin that nearly gave him the titles. After the influencer jumped at Roman with a Coast to Coast on the commentators table.

The Usos appeared to defend their leader, but Jake Paul made an entrance on him to get them away from the ring. Only Sikoa came out on stage to confront Jake and distract him from what was happening in the ring. Logan decided to launch himself at everyone involved, but was met by a Superman Punch and Roman Reigns’ Spear for the win by three.

In this way, Roman Reigns retains the Unified WWE Universal Championship in his third starting defense. “The Tribal Chief” maintains a reign of 797 days and 25 defenses with the Universal title, to which he added the WWE Championship 214 days ago at WrestleMania 38. Reigns defeated Brock Lesnar on April 3 in Dallas, Texas to obtain this last title and unify both belts.