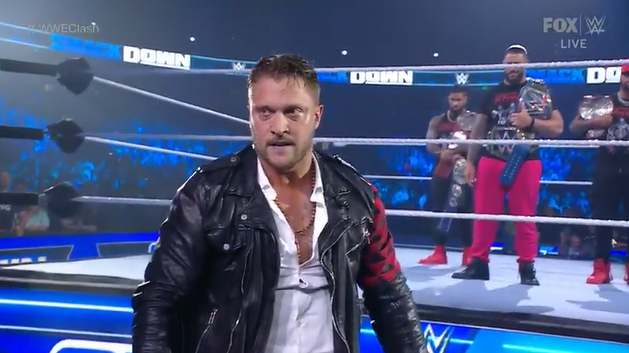 Karrion Kross could receive a big starting push in WWE. A specific request from USA Network could benefit Karrion Kross in his return to WWE.

The most recent episode of Friday Night SmackDown ended with a huge surprise in the form of the return of Karrion Kross and Scarlett. The Superstars fired by WWE in November 2021 orchestrated an attack on Drew McIntyre, interrupting the latter’s confrontation with Roman Reigns en route to their title match at Clash at the Castle.

The arrival of “The Doomsday” to WWE could be the first step in responding to a request made by USA Network. Fightful Select reported that the network where Monday Night RAW is currently broadcast is dissatisfied with the absenteeism of the unified champion Roman Reigns on Monday nights.

It can't be! Karrion Kross is back!

USA Network offered to create an interim world title to be played on RAW. However, WWE chose to move forward with completely different plans. Karrion Kross could be the first step for a division of the WWE and Universal championships.

As made clear on SmackDown, plans point to “The Doomsday” playing a big role in the rivalry between Roman Reigns and Drew McIntyre. One of the ideas considered among the creatives of the company is the possibility that Kross compete for only one of the belts of “The Tribal Chief”, although this plan has not yet gone beyond simple discussions.

We've heard of a major pitch for the WWE top title scene. It's coming to https://t.co/jy8u4a7WDa in minutes

Karrion Kross and Scarlett had a joint stage within WWE between 2020 and 2021. The two quickly became popular within NXT, to the point where Kross won the maximum Championship of the then yellow mark twice.

The debut of “The Doomsday” on RAW in the middle of last year received negative reviews for the changes that his character underwent. It should be noted that at the moment, Karrion Kross and Scarlett are not assigned to any of the WWE brands as definitive to join the company’s cast.