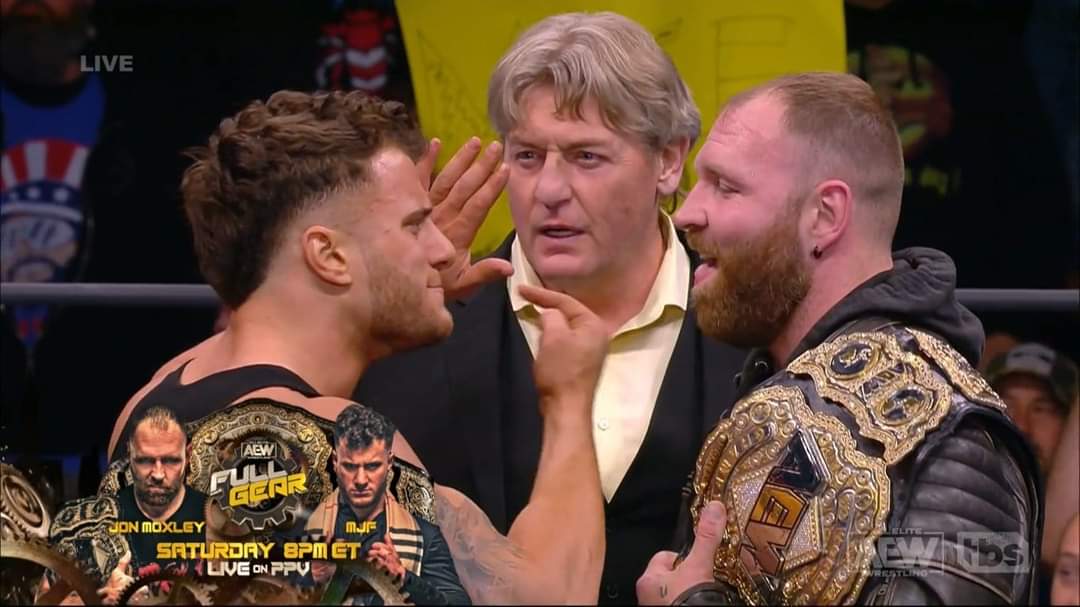 Swerve Strickland arrives for his match with Anthony Bowens, but Billy Gunn runs in to attack him.  Several referees come out to get Daddy Ass out of ringside.

Samoa Joe is interviewed by Tony Schiavone. Powerhouse Hobbs arrives and tells that he is late.  “I’m the one who’s been kicking Wardlow’s ass week after week. And I can do it with you now,” Joe is surprised by Wardlow, who comes from the audience and attacks him with a Spear.  Chaos breaks out among the three men!  Fighters and security personnel come out to try to stop them.  Wardlow flies from the ring on everyone outside!

Britt Baker talks about the journey she has taken in three years.

The return of The Elite in Full Gear is confirmed to fight for the AEW Trios Championships against Death Triangle.

Ethan Page defeats Bandit to advance to the final of the Full Gear Eliminator Tournament.

Saraya was interviewed by Renee Paquette earlier.  She says she feels very lucky at the moment, and she talks about the opportunities.  “I want to beat the best, and you are. I’m tired of this back and forth, I want us to fight. See you on Saturday,” closes Saraya.

Toni Storm defeats Anna Jay AS.  After the match, Jamie Hayter comes out to the ring and faces Toni Storm.

AEW World Champion Jon Moxley steps into the ring with William Regal.  Mox introduces himself saying that he is the toughest guy, that he supports what he says, that he has traveled the world fighting against the greatest challenges. The Firm attacks Moxley and Regal!

MJF comes out to the ring and takes care of The Firm.  The Gunns attack him on the ramp and he quickly takes them down.

Entering the ring he gives cheap blows to Ethan Page and W Morrisey to take them out.  “I didn’t save you because I like you, Jon, but because I don’t want your fan club to have excuses when they beat you fair. No need for the ring. Right, Will?” MJF says addressing Regal at the end.