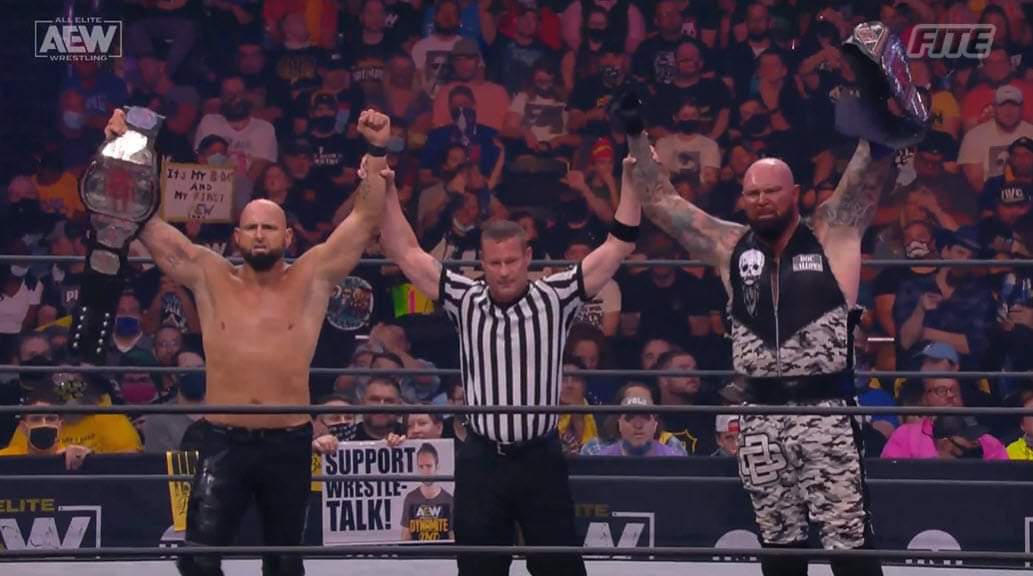 TNT Drama broadcasted the 98th episode of AEW Dynamite from the Petersen Events Center in Pittsburgh, Pennsylvania on August 11. Here is a brief overview of AEW Dynamite results.

.@The_MJF and @RealWardlow with one last message to @IAmJericho before tonight's Chapter 4 of the Labours of Jericho.

Tune in NOW to @tntdrama for #AEWDynamite LIVE! pic.twitter.com/mJc8jhcjpk

One Winged Angel to Dante, Superkicks from the Bucks to the Sydals and BTE Trigger for the win. Winners: The Elite (Kenny Omega, Matt and Nick Jackson) via pinfall.

Tune in NOW to @tntdrama for #AEWDynamite LIVE! pic.twitter.com/m892CHYthx

Next fight was Darby Allin (with Sting) vs. Daniel Garcia (with 2.0)

He had to work hard for that one, but @DarbyAllin gets the win!

Tune in NOW to #AEWDynamite LIVE on @tntdrama! pic.twitter.com/kwuvhgaVqK

Next fight was Best Friends (Orange Cassidy and Chuck Taylor) (with Kris Statlander) and Wheeler Yuta vs. The HFO (Matt Hardy, Marq Quen and Isiah Kassidy)

In the ring, Gin & Juice on Yuta but Cassidy stops the count. Orange Punch, Jack Evans distracts Cassidy, Hardy throws her to ringside and applies the Side Effect on Yuta for the win. Winners: The HFO (Matt Hardy, Marq Quen and Isiah Kassidy) via pinfall.

Next fight was Nyla Rose (with Vickie Guerrero) vs. Kris Statlander (with Orange Cassidy)

Nyla knocks her down with a Spear and climbs to the third rope, but Statlander steps forward, applies a Powerbomb and Area 451 for the win. Winner: Kris Statlander via pinfall.

Area 451! What a gutsy win by @callmekrisstat!

Tune in NOW to #AEWDynamite LIVE on @tntdrama! pic.twitter.com/oHxCCHPfic

Flatliner to Anderson and once again they try the Fatality, but Gallows distracts the referee by introducing the championships inside the ring. Anderson’s Gun Stun, Magic Killer and victory. Winners and STILL IMPACT Wrestling World Tag Team Championships: The Good Brothers (Doc Gallows and Karl Anderson) via pinfall.

#DarkOrder have #GoodBrothers reeling! Are we about to see new @IMPACTWRESTLING tag team champions?!

Tune in NOW to #AEWDynamite LIVE on @tntdrama! pic.twitter.com/firtsWh0Rb

Taking advantage of the distraction, Jericho hits Wardlow with his iron bat, finishing with the Judas Effect and victory. Winner: Chris Jericho via pinfall.

He's done it! @IAmJericho survives and he will face @The_MJF for the Fifth Labour of Jericho!

Tune in NOW to #AEWDynamite LIVE on @tntdrama! pic.twitter.com/CMaWIDHLIT